Julian Peters, our Resource Development Associate, recently took a month-long trip to Indonesia to build sustainable housing. He has blogged about his experience in honor of Earth Day.

I first learned about Earthships in 2012, when I came across a video of the Earthship crew working in Haiti after the earthquake rocked the island. Earthship Biotecture is an organization that builds these structures, they have tested the earthship design methods all around the world and made those designs available online. They have now been given a remote island in Indonesia on which they will build an eco-village of around 40-50 structures, which led me to Indonesia.

As with other things in the sustainability realm, I was intrigued by this technology’s ability to do more with less, to stretch and maximize resources as well as how accessible it is, and what those things can do for those who have less. After several years of observing their work I decided to take a leap of faith and jump in feet first, and signed up for a month-long Earthship build halfway across the world in Indonesia. After a 36-hour flight to Lombok, A three-hour ride from Lombok airport to the harbor, a three-hour ferry ride from Kayangan to Poto Tano and then another ten-minute boat ride, I finally arrived to Kenawa Island. 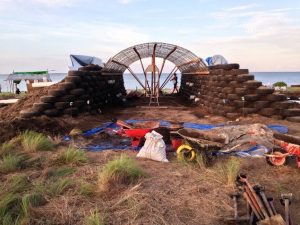 The island was grassy and flat, with a large hill at the north end, absolutely undeveloped aside from two shops, one previously built earthship, and numerous palapas (shaded structures meant to protect people from the sun and wind) dotting the beach. What I found when I landed was a world so different from what I had lived and been accustomed to for so long. Being a lifelong DC resident and growing up in the city, to say I was out of my comfort zone was understatement. Aside from the dirt and the bugs, there were plenty of people to adjust to as well. There were only a handful of Americans, about 5 out of the 40 people. Most of the volunteers were from Australia and New Zealand, and the island was full of people who lived a completely different lifestyle, people who, instead of going to college, studied permaculture or backpacked through South Asia, and thus their life experiences were worlds apart from my own.

The day-to-day on the island was both routine and unique; every day you wake up and go to sleep as the sun rises and sets, in a way that seems more natural than it does back at home. You wake up, work out or meditate, eat breakfast and work, and each work day presented its own challenges. One day you’d be pounding tires with earth for what seemed like forever and gave a gratifying feeling at the end, the next day you’d be doing grout work, serene, peaceful and contemplative. The build even influenced the locals; because of the project, the locals are now recycling and using compost holes for their food waste. 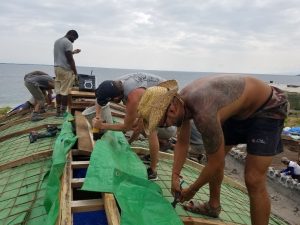 Time spent on the island fosters a unique sense of community; you go from being complete strangers to sharing communal experiences; small things like drinking from the same glass that would be considered taboo at home go without notice there. In DC, I’ve seen people throw away whole plates of food because a fly landed on it, but such things are just a fact of life on Kenawa and no one is hurt by it. It was an environment with no pretense, no questions like “where do you work” or “where do you live” that seem largely to serve as some sort of social status qualifier. I can’t think of another time when I met a group of people that were so open and so easy to communicate with. The locals were extremely friendly and hospitable; at any given time, you’d be sitting in the shop and Mama would come from the back with a plate of food in hand and drop it in front of you, “Macan” (eat). At that point, you can’t NOT eat it, that would be disrespectful. The Indonesians were insistent on taking care of you, no matter how little they had to give.

I thoroughly enjoyed my time in Kenawa; the fresh air and soil, and just generally being so far out of my comfort zone for so long, have affected me in ways I still can’t fully articulate. I never realized how bright the moon was I would wake up at 3 in the morning and be able to walk around with no light at all, while pollution in the city prevents me from seeing all the stars in the sky and just how numerous they are.  A month covered in dirt and cement can change your perspective on things. I’ve lost weight, my skin is clearer, and I feel more in tune with myself in general. 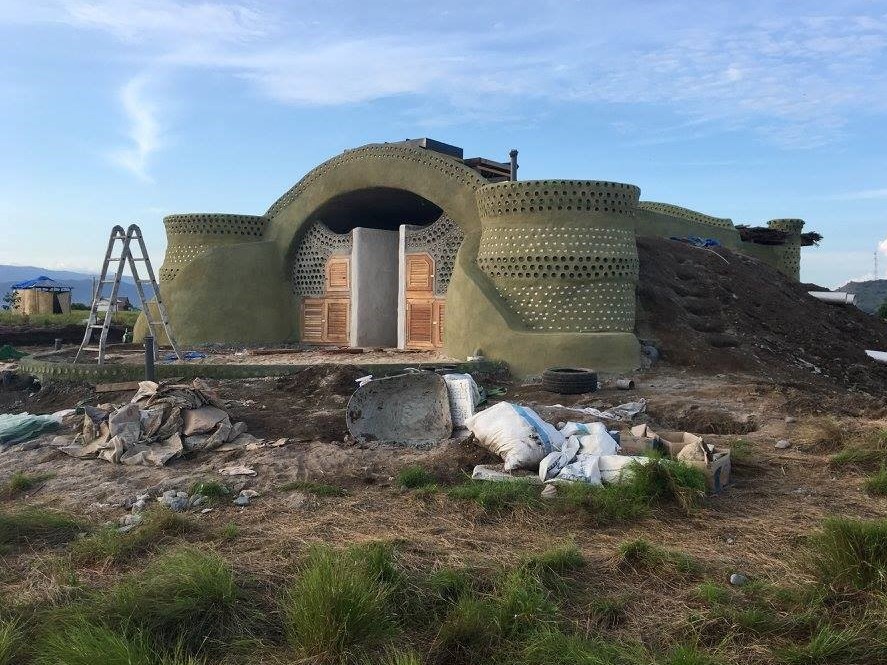 Earthship inspired buildings may very well be a solution to housing issues abroad, and, while heavy regulation keeps them out of big cities, there are plenty of earthships that have been built in rural America. There have been earthship builds in Montana, Philadelphia, upstate New York, and there are plans to build an earthship Village in Colorado. Volunteers on the island came there with goals of building personal homes, retirement homes, vacation homes and orphanages. It is an option for anyone looking for alternative methods of living, who doesn’t necessarily want the white picket fence in the suburbs or for those who wish to live simply and get away from the hustle and bustle of the city. It is definitely a step outside the box but, with the right resources and motivation, it is absolutely possible to find a plot of land and build an earthship or earthship village for oneself, one’s family, etc.. With some creativity, the possibilities are endless.

Barriers to Affordable Housing for the LGBTQ+ Community